BEEP BEEP BEEP ! Not what you want to hear at 4am in the morning, especially after two hours of “sleep”. But the possibilities of what was to come that day lifted my sleepy body out of bed. Essentials packed and the call from Connor that the boats were ready I headed out to be greeted by what has got to be the best view I’ve ever had. Mist rolling over the lake and the Rocky mountains peaking over the horizon, today had to be a good day.

First stop was the Loons. We were really hoping to capture the chicks taking a ride on the parents back and the guys had the perfect spot in mind. As we zoomed across the lake like a James Bond movie the engines slowed and slowly appearing out of the mist where two dark shapes. The thing about Loons is that you will probably hear them before you see them. Their calls carried on the wind like guardians of the lake “Ca-ooo”. We arrived just as the sun poked through the clouds, highlighting the beautiful iridescence within their plumage. At first you think they neck and chin in pure black but with every slight movement an array of greens and blues shone through. 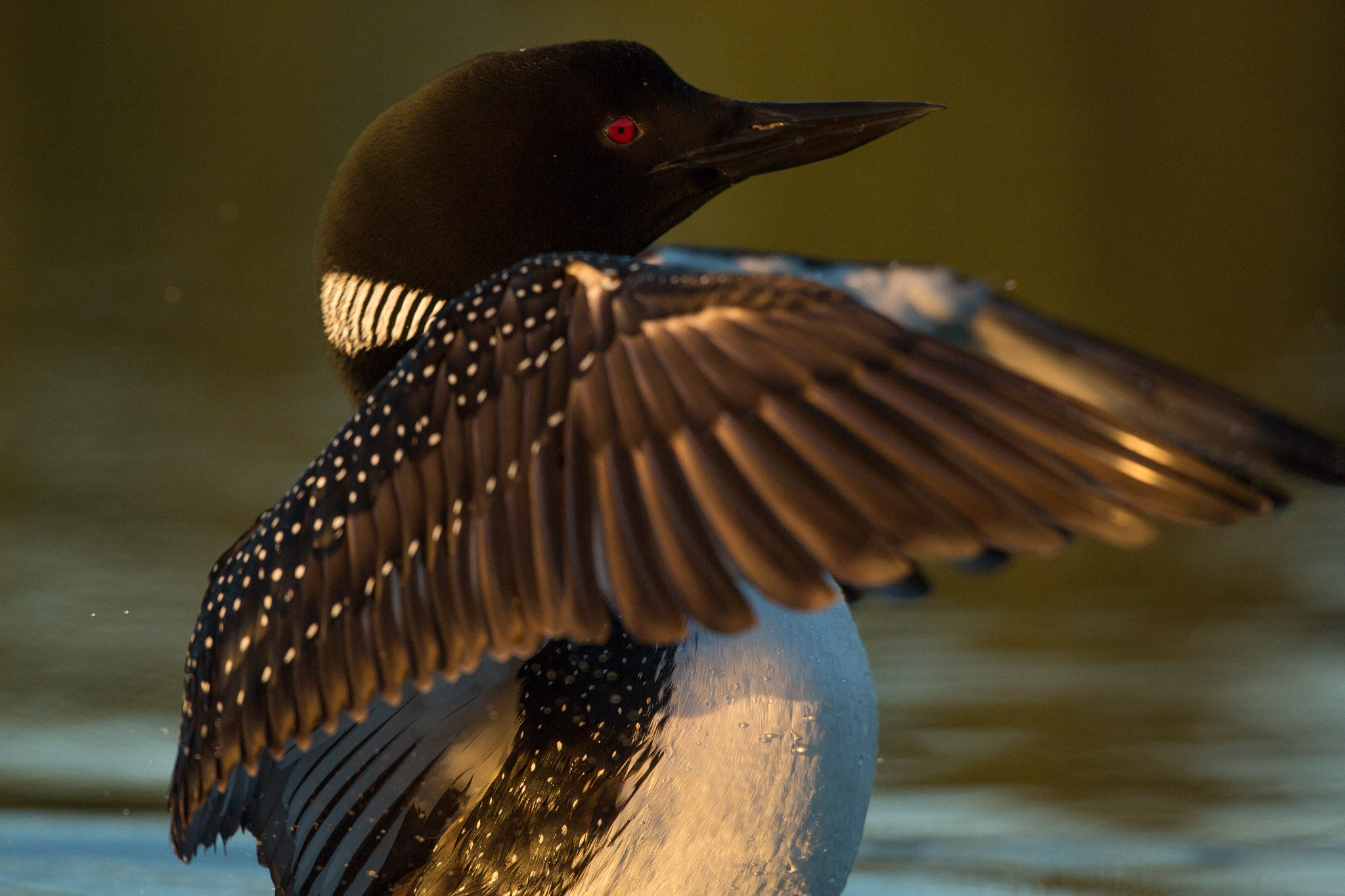 Spending time with the Loon pair and their chicks enabled us a fascinating insight to their parental duties with both parents constantly diving, catching all sorts from small fish fry to huge Leeches. It was funny to watch these small fuzz balls trying to devour their pray. Often Leeches would suction themselves to the top of the chicks bill in a bid to avoid their fate. 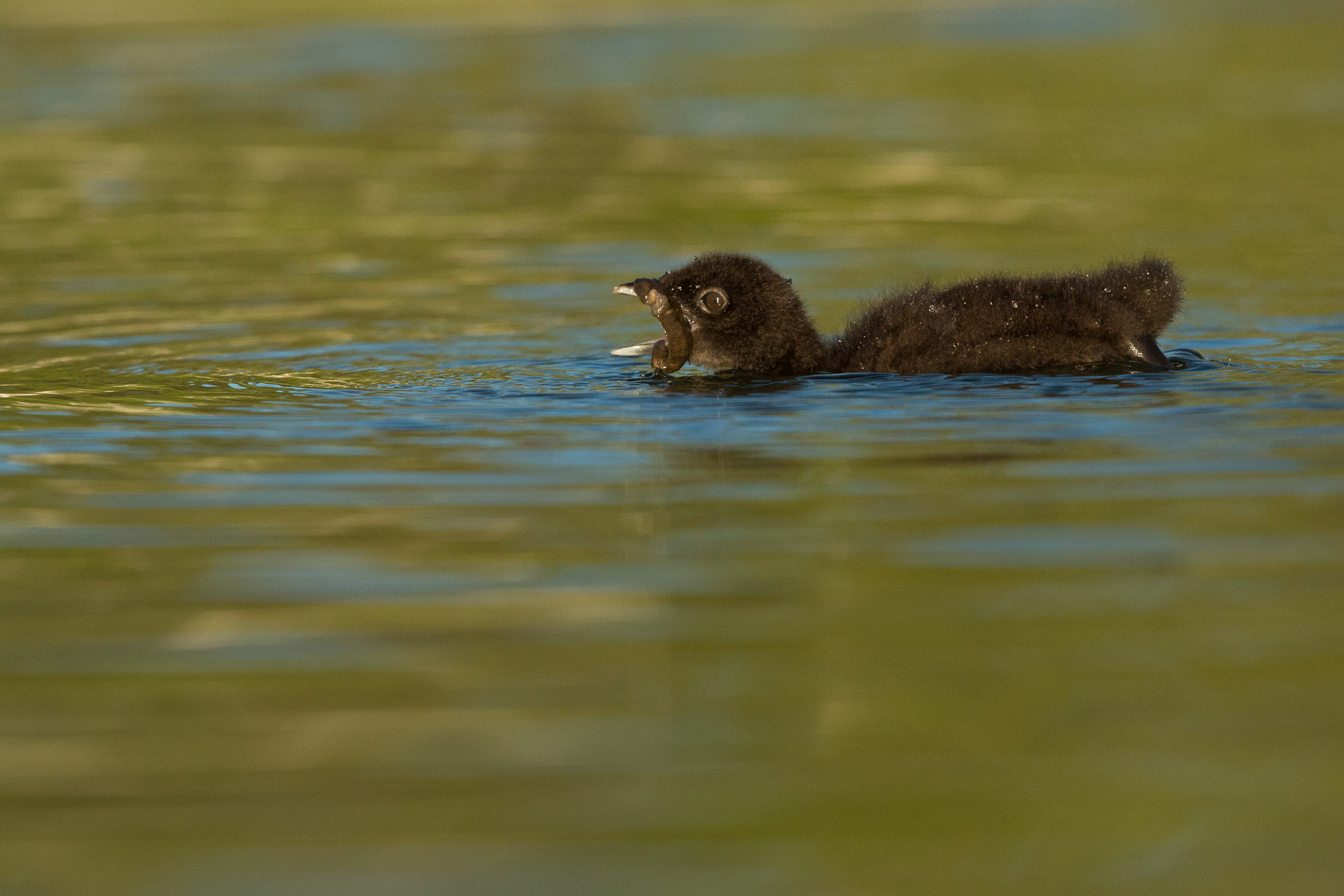 Just as we thought the action had died down Gerry calmly goes “moose”. Looking behind us we see a cow Moose making it’s way across the lake. The lads started up the engines and soon enough I was photographing my first ever Moose ! I have to say it is simply one of the most peculiar looking animals I have ever seen. If it ever had a cold it would probably blow you away with it’s snout, it was enormous and I thought I had a big nose ! 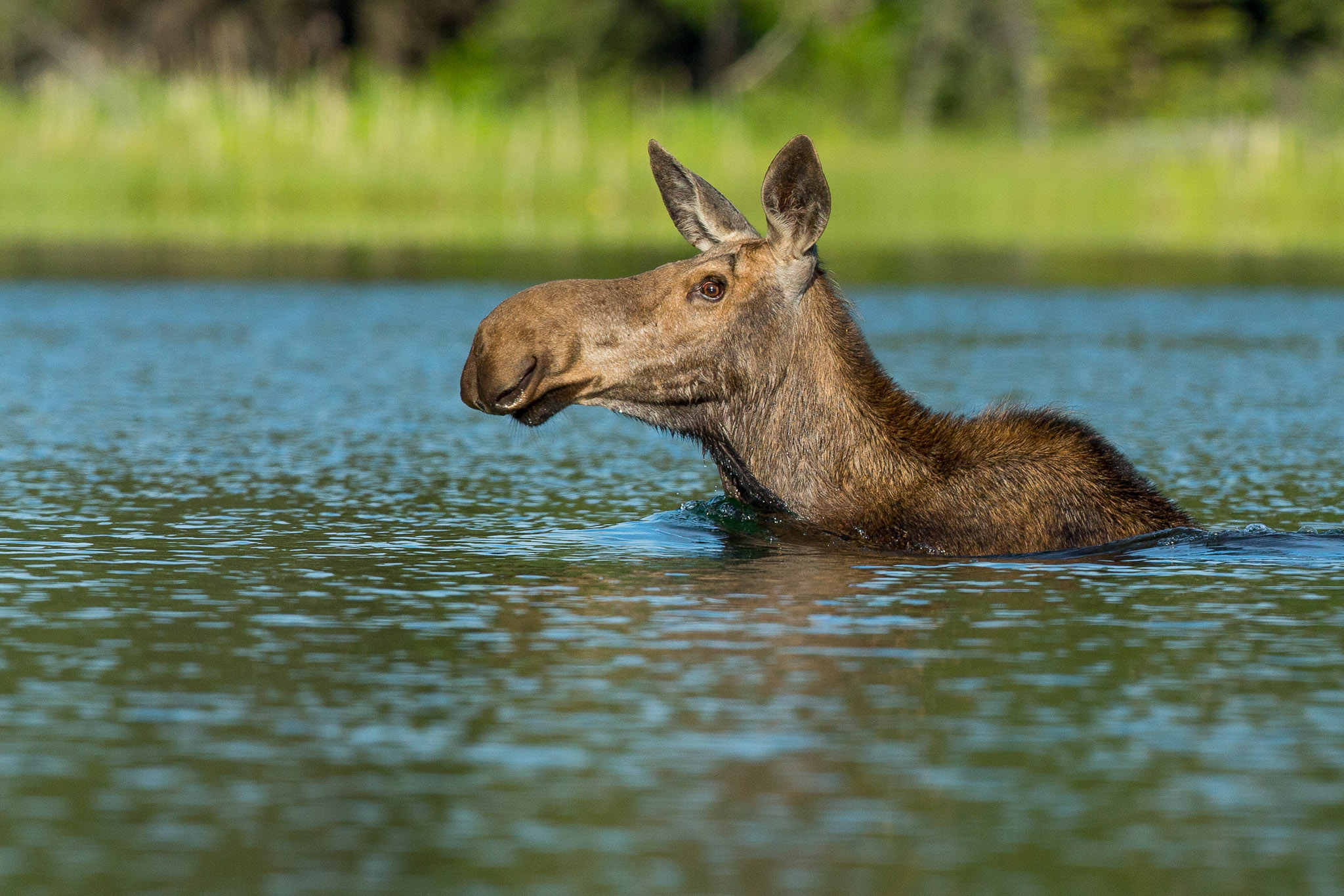 After most of the decent light had burned away and the action slowing  the temperatures rose and there was only one thing to do…jump in the lake ! I took the first leap of faith and as you can imagine lakes in Canada don’t come with temperature control. It was freezing but so worth it and after what seemed like an eternity travelling across the world the day before it was a welcome refresh. By this point I hadn’t showered for about three days so I guess it wasn’t all for nothing.We spent most of the afternoon in the lake, from kayaks to paddle boards we had it all. After all the water sports we headed in catch up sleep and editing, it wasn’t long before we were out on the road again for more Great Grey Owl action ! Before we got to the owls we stopped off at the Blue Birds and Flicker cavities. It’s always cool seeing new species, especially when they are bright Sapphire blue ! We spent a fair time with them watching as they would come in to feed the young. This species is sexually dimorphic, this imply means that you can tell the male and female apart just on looks. The male has this spectacular blue plumage and the female is a lot more washed out looking. Both made for equally beautiful subjects and gave us plenty of great photographic opportunities. But time was catching up with us and it was soon time to head over to the owls. 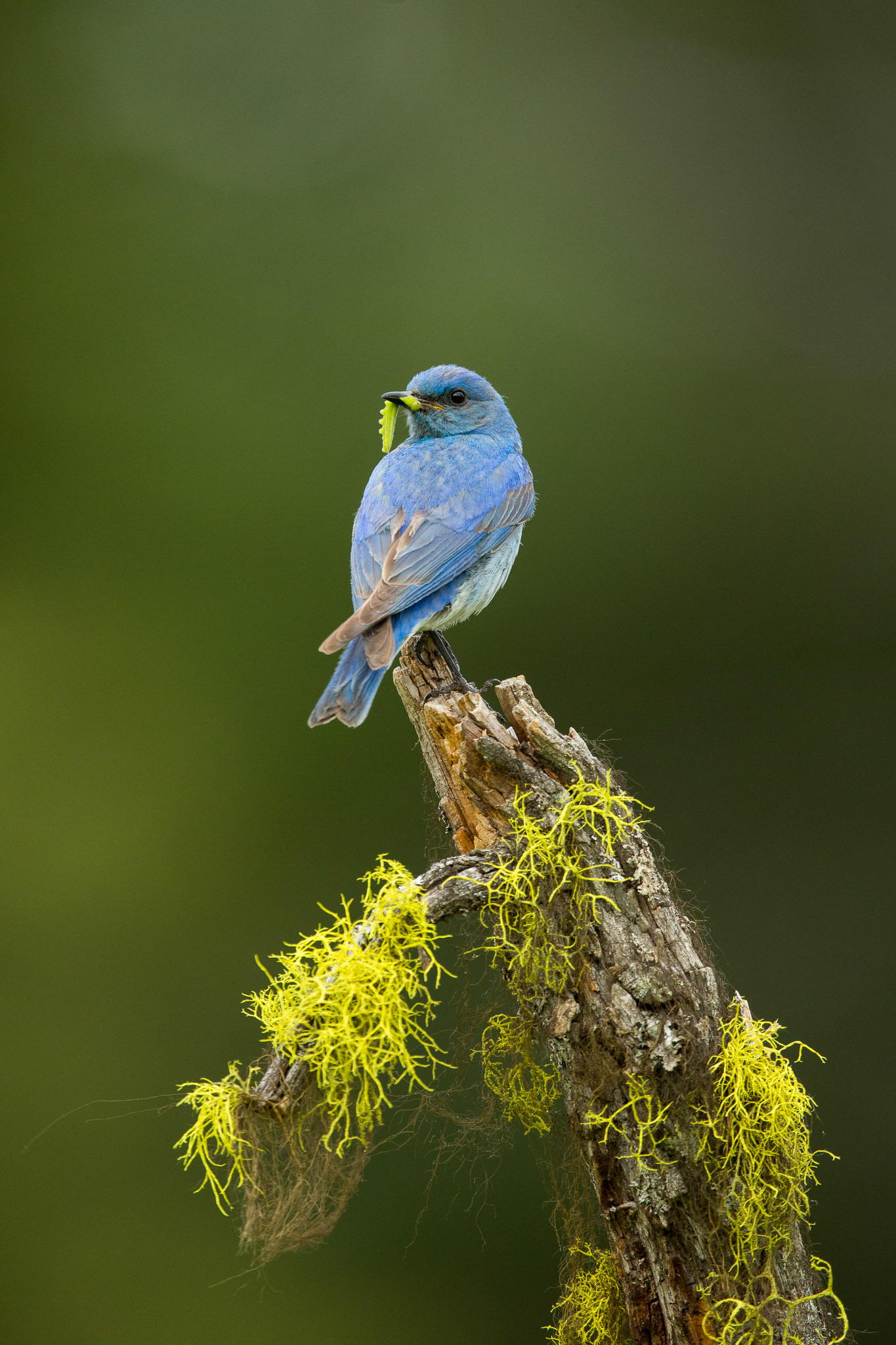 Pulling up we spotted the female high in the aspens, keeping a watchful eye on the chicks. The chicks themselves were full of character and would often peak from behind braches. They were very good at keeping you on your toes with a clacking of their beaks.  Often they would sit like little fluffy sentries meaning you could get some intimate close ups. 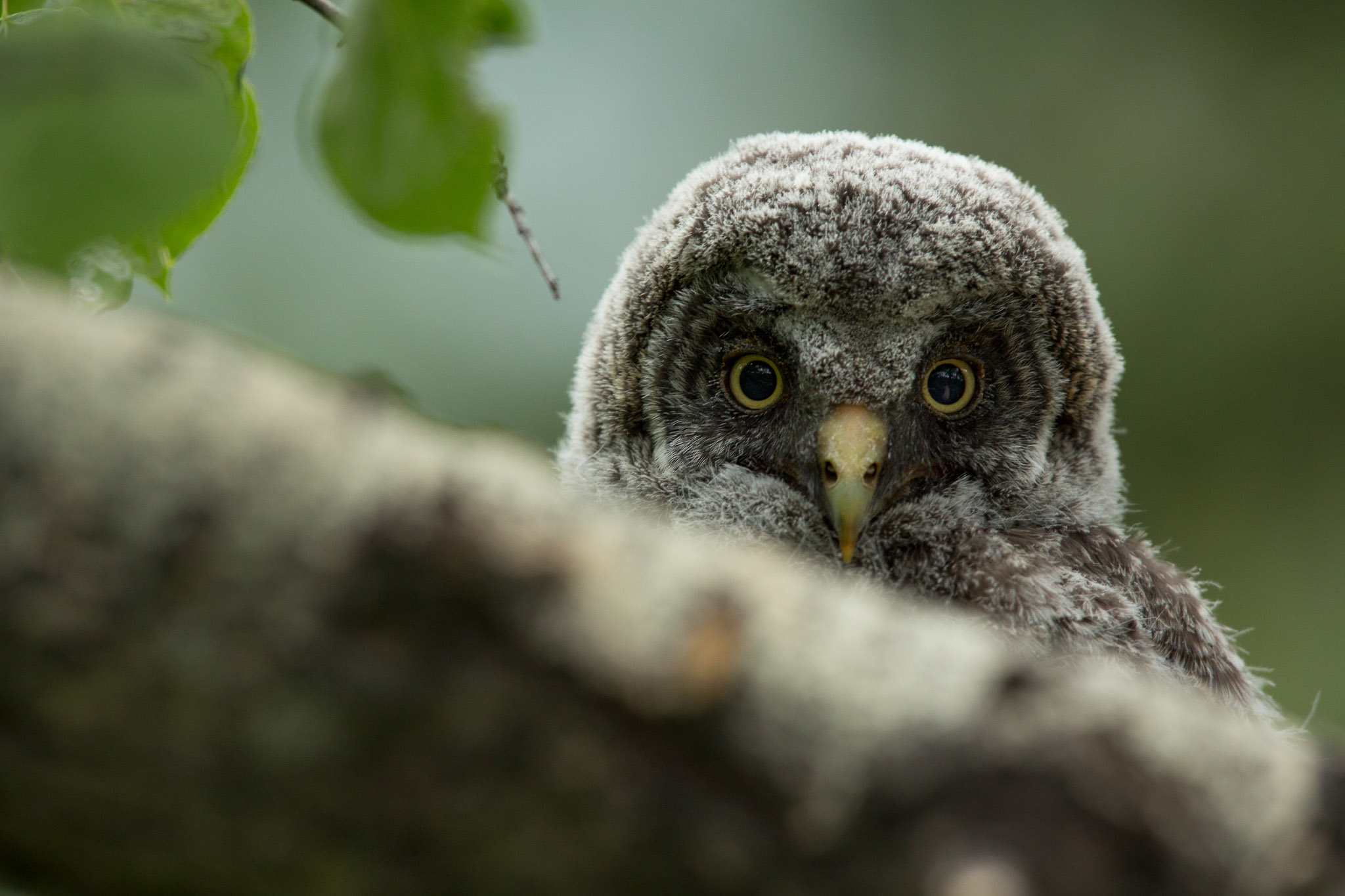 As the day was nearing an end we found ourselves in the marshy meadows following the male Great Grey Owl as he hunted along the tree line. The trick was to get in front of him so you’d be ready to get the flight shots. It was very hit and miss but it paid off occasionally. 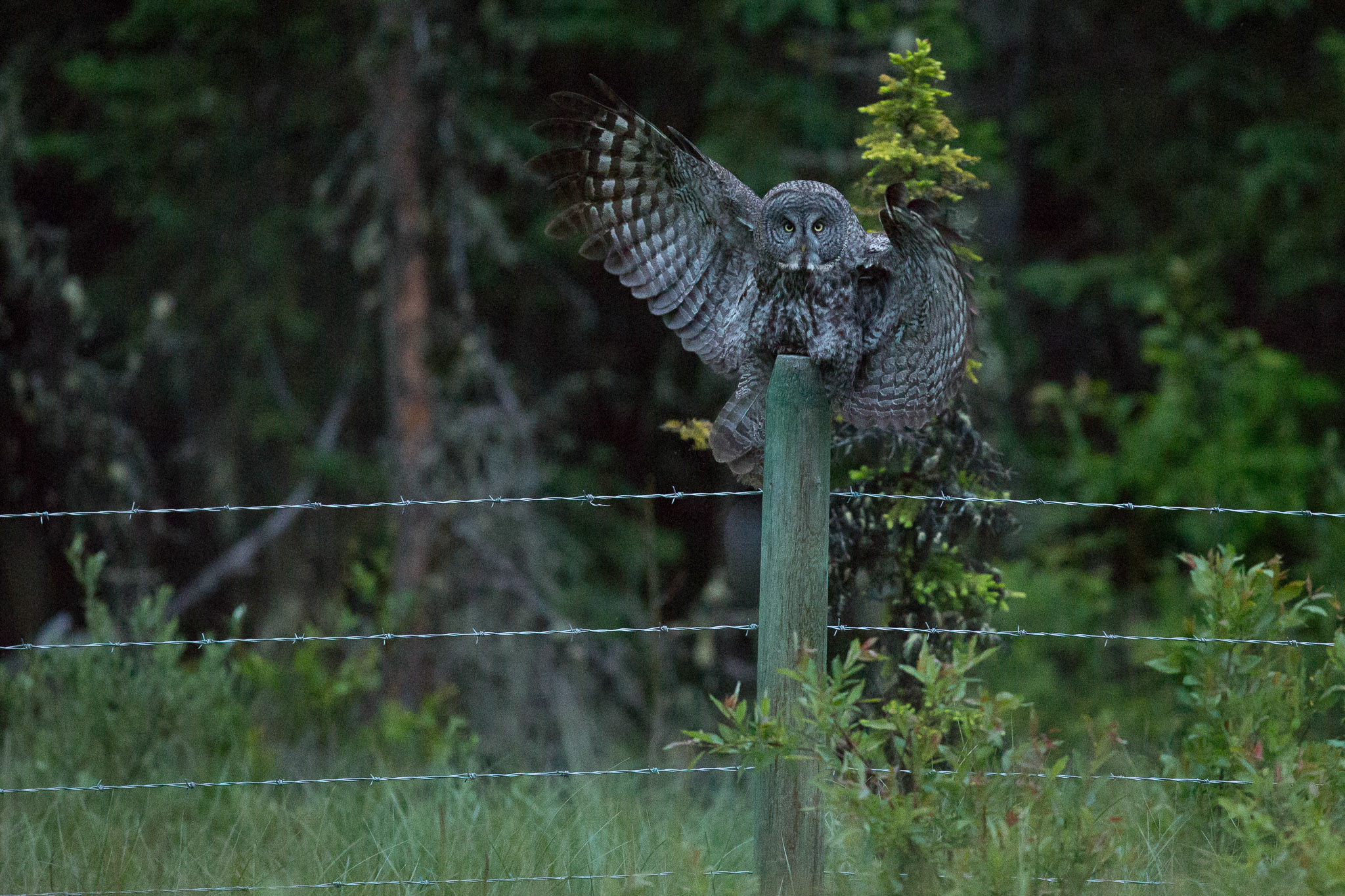 The light had pretty much gone apart from the last light of the spectacular sunset that had met us after leaving the male Great Grey. It had been an awesome first full day and I was looking forward to seeing more of what Jess and Connor had in store over the coming week !