It’s been a while since I last wrote on here and with the coronavirus epidemic hitting the public hard I figured I would give writing a go again. We will continue from where I left off and will recount my time spent with some very talented friends; Ashleigh Scully, Connor Stefanison, Jess Findlay and of course Gerry Scully. 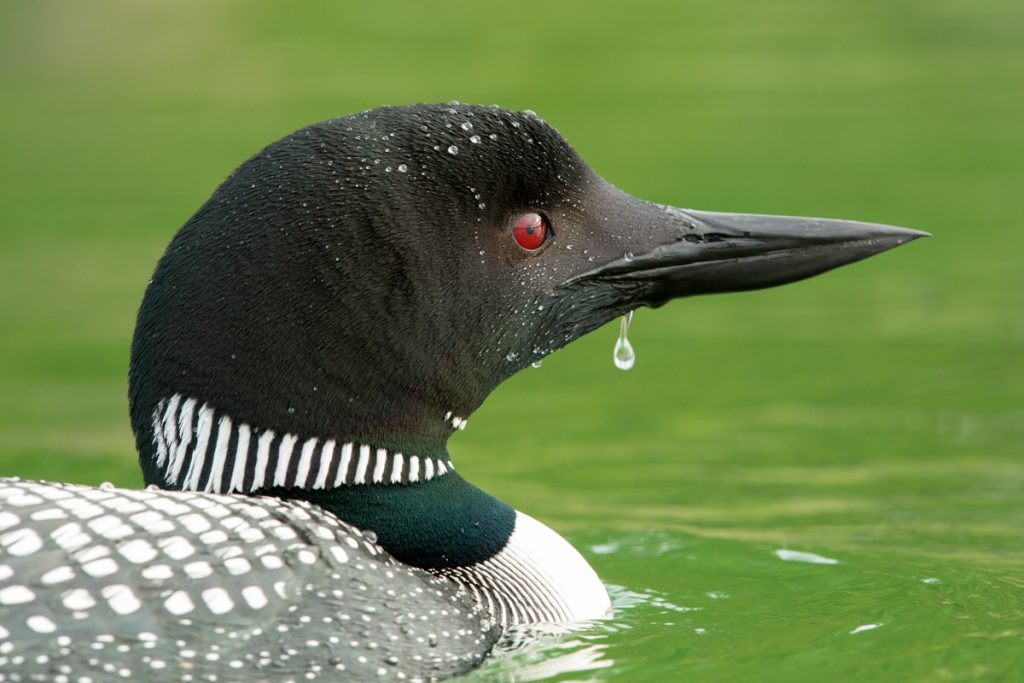 We started a little later in the day, around 6am, due to low cloud blocking the otherwise painterly sunrise. A nice surprise for me was that the temperatures were not as cold as usual, that is until we found ourselves zipping across the late. It was on the boats that you really felt the biting cold as the cool morning air whipped across our faces, something which definitely woke you up if you weren’t already !

Slowing down we cruised into a quiet corner of a still bay which provided the perfect nursery environment for the Loon families. Just as we had seen previously the chicks were just waking up and some of them still found warmth and comfort on the backs of their parents. Just like me in the morning I watched in joy as the chicks would often stretch out their legs ready for a morning of swimming and learning to tackle an array of prey items. 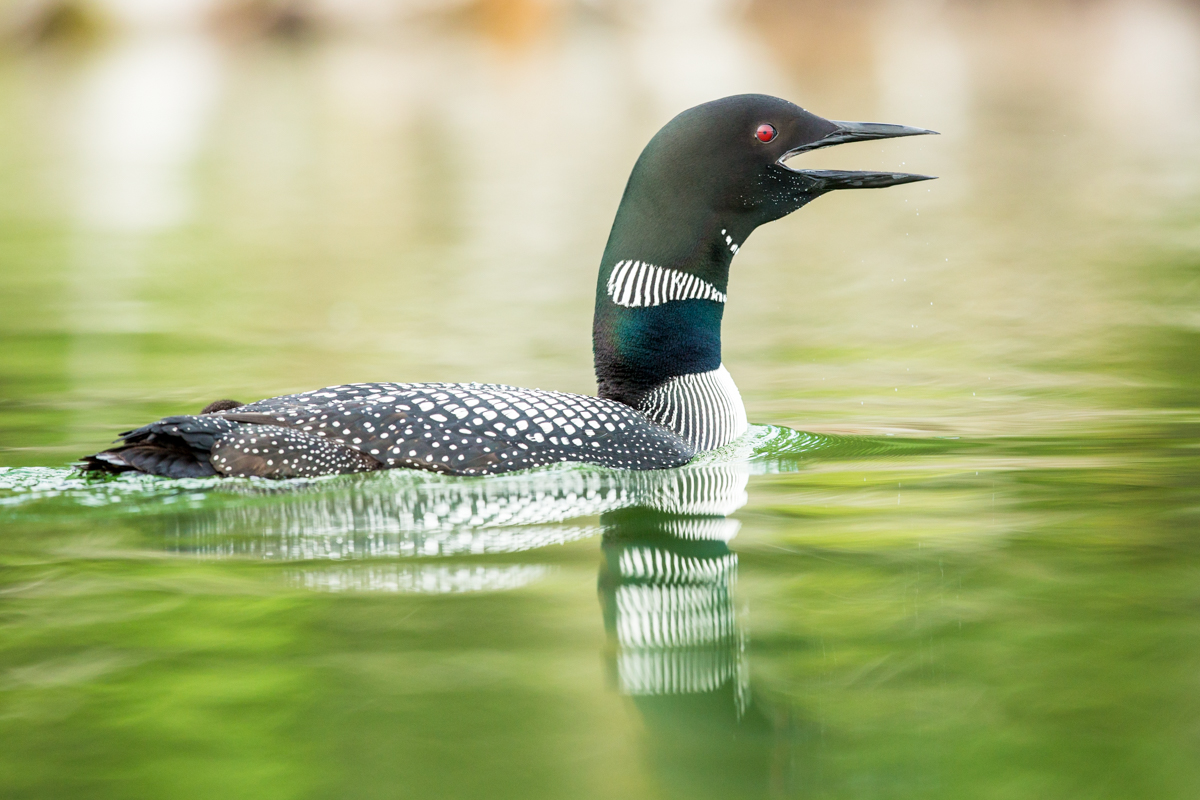 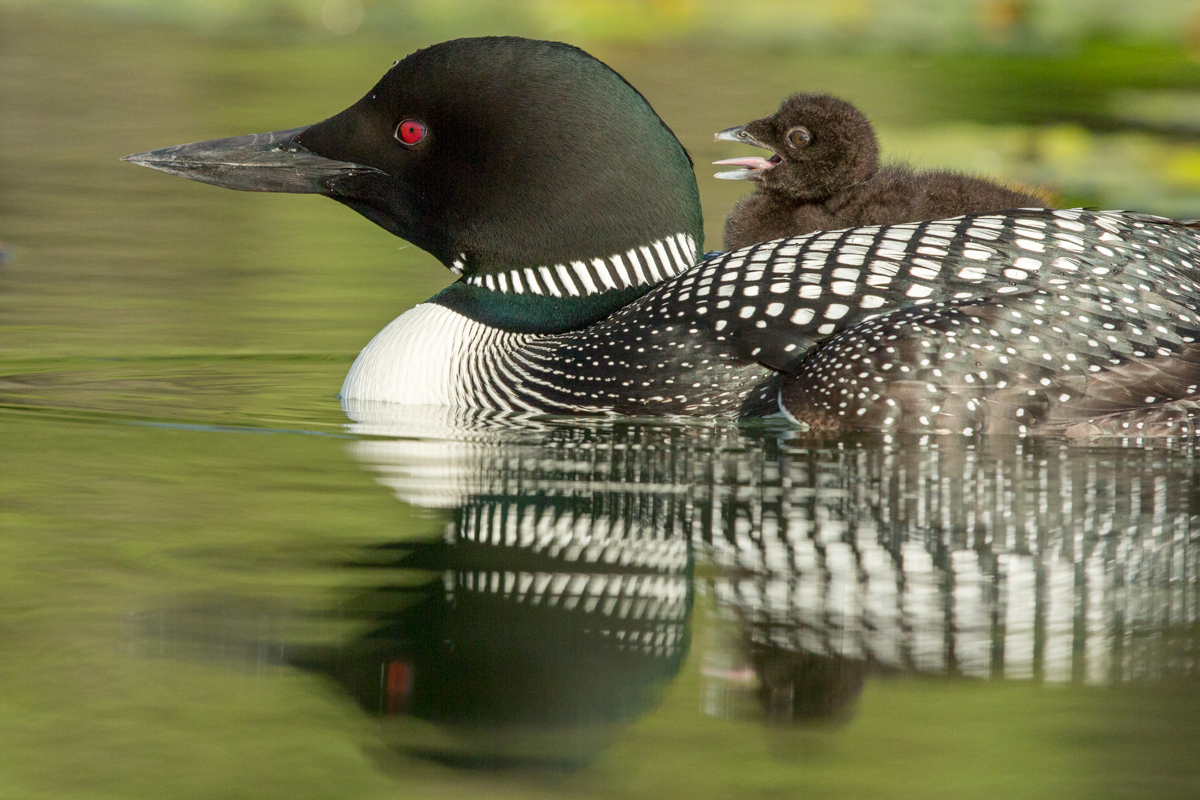 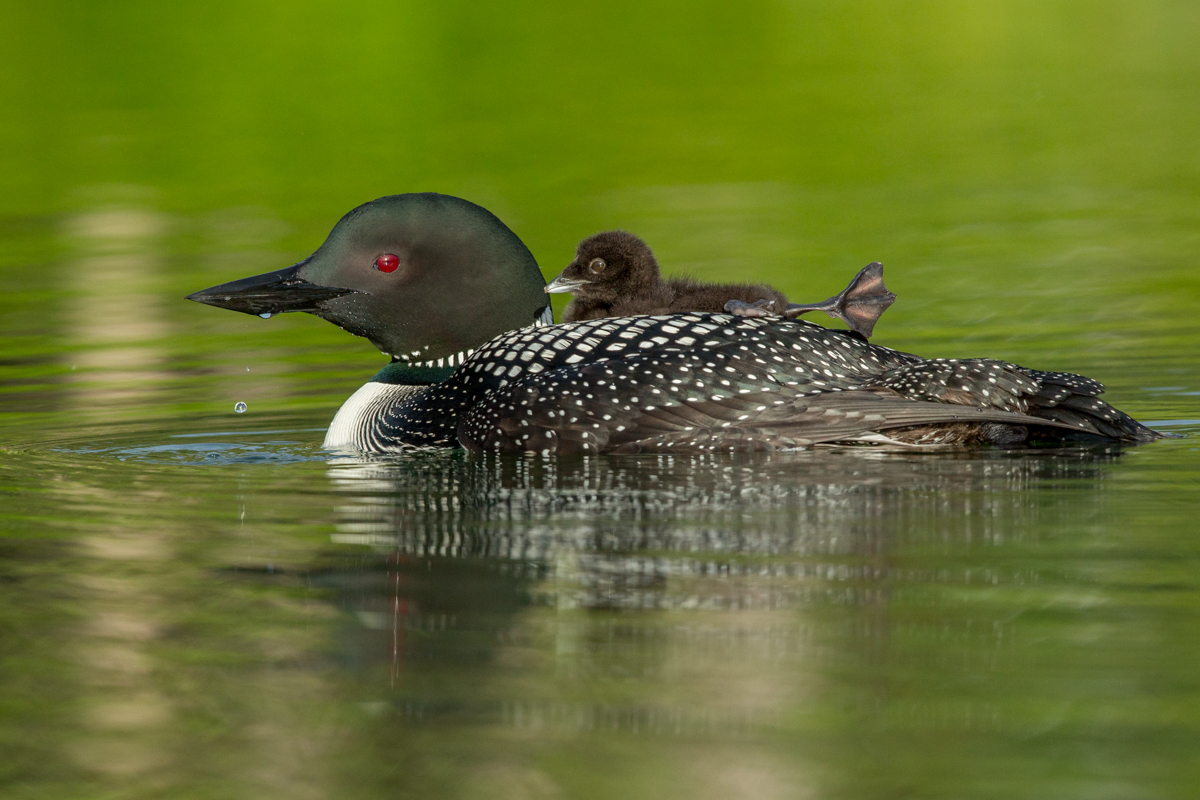 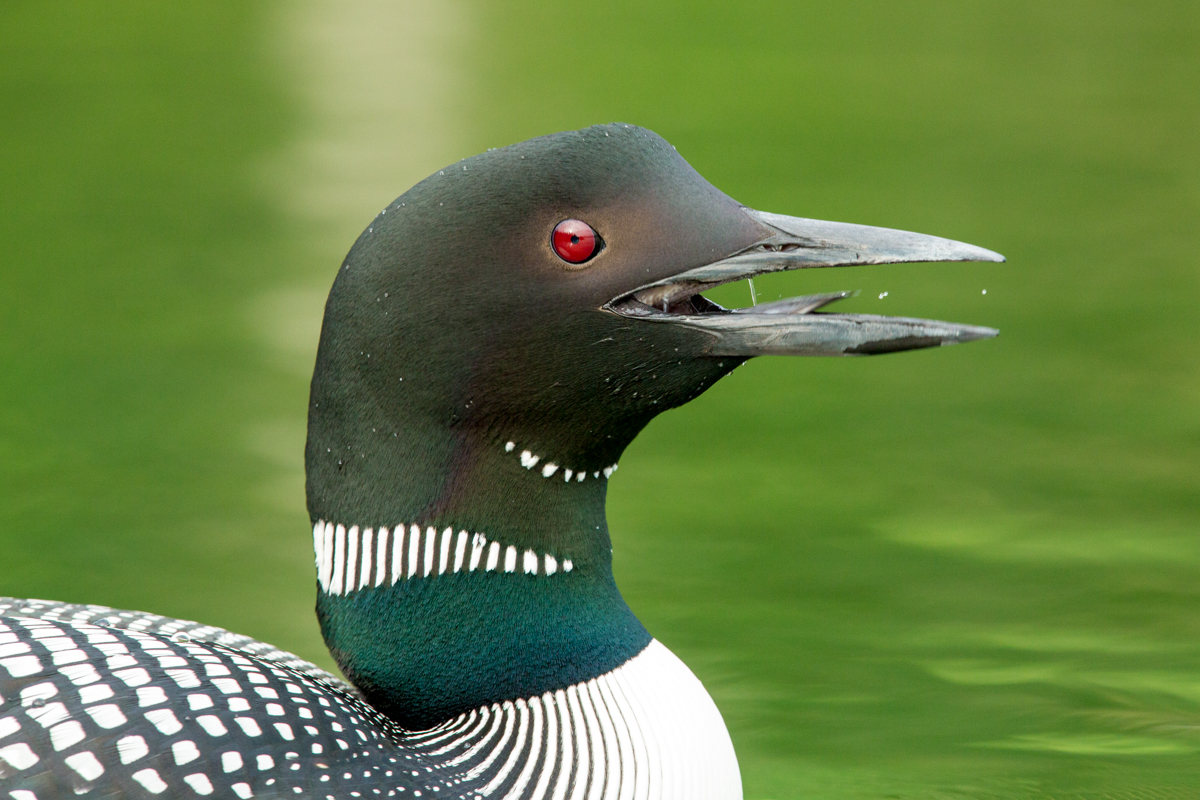 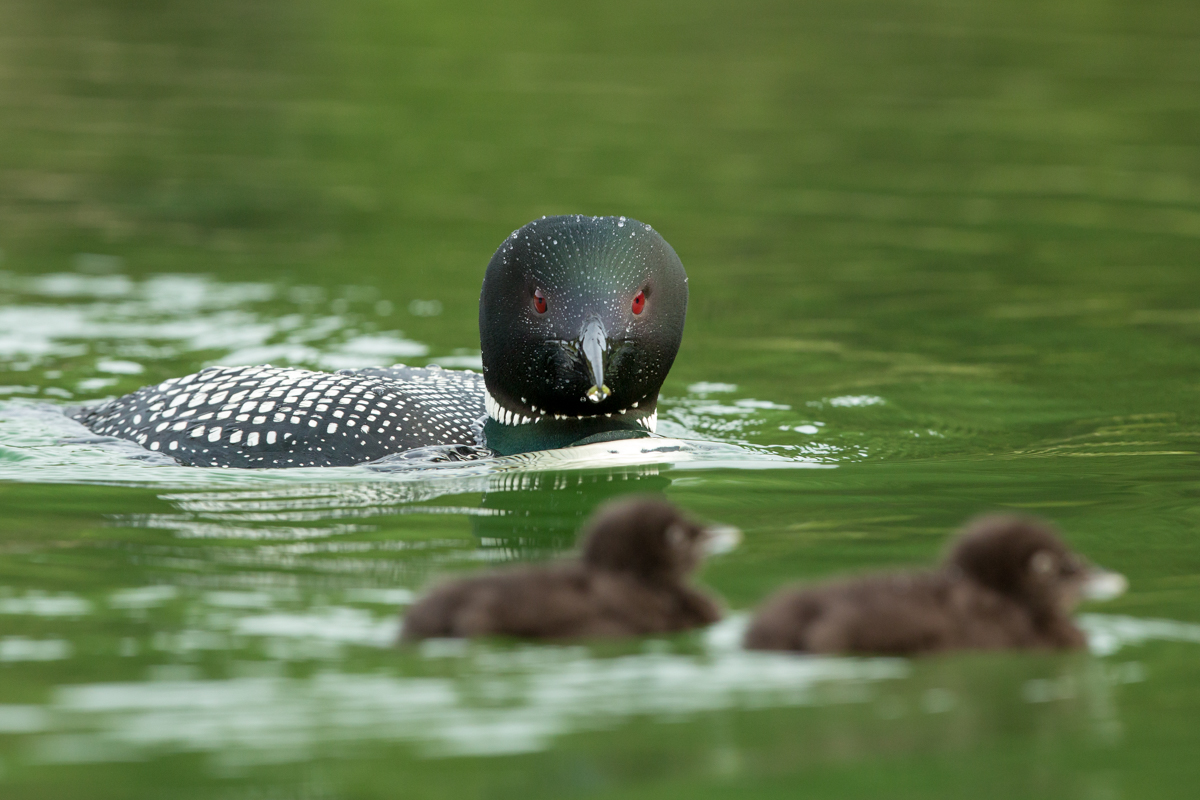 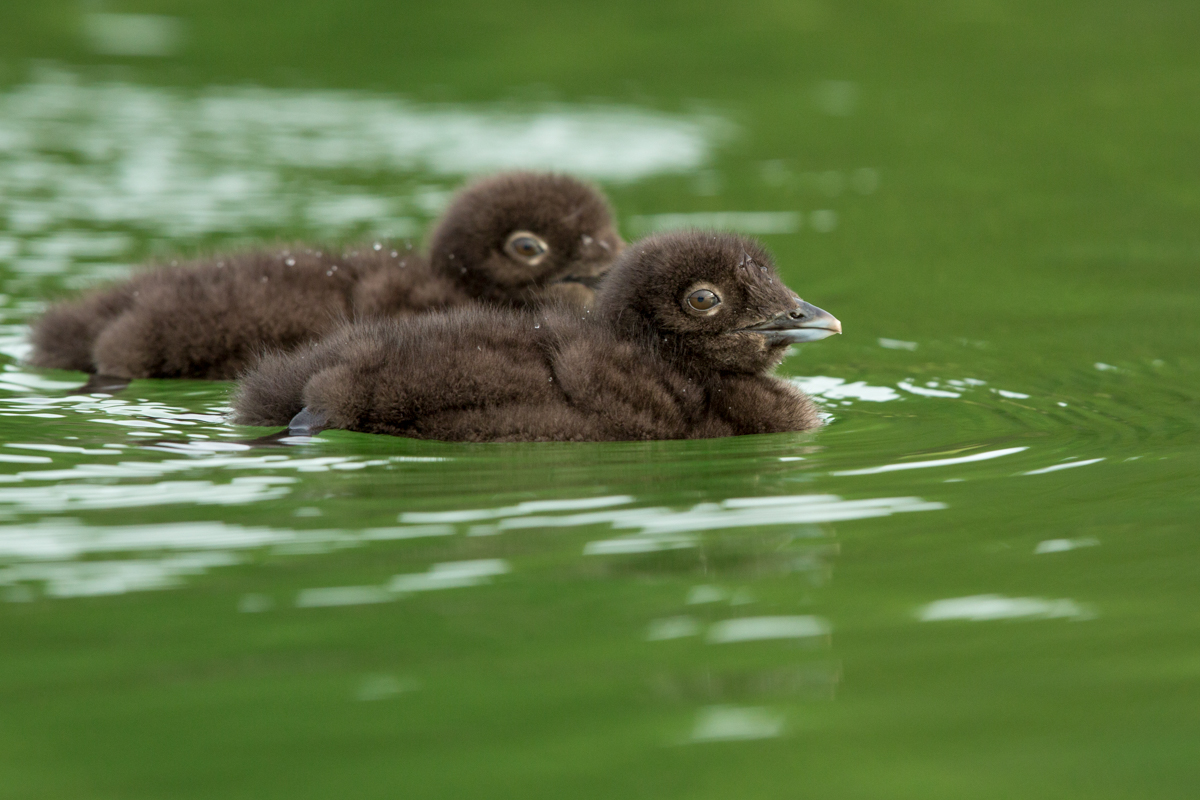 As the morning wore on we said goodbye to the Loon family and headed to a small island off shore. Here Connor explained that a pair of Bonaparte’s Gull’s had nested. Slowly drifting around the island we waited for the small brown chicks to appear. The low vegetation growing on the island provided the perfect hiding spot from would-be predators such as Bald Eagles. The ragged dead tree on the island acted as the lookout station for the parent birds who kept a close watch on the chicks below. It was really great for me to see chicks as back in England they are a scarce species but here they were very content and confiding in front of our lenses. 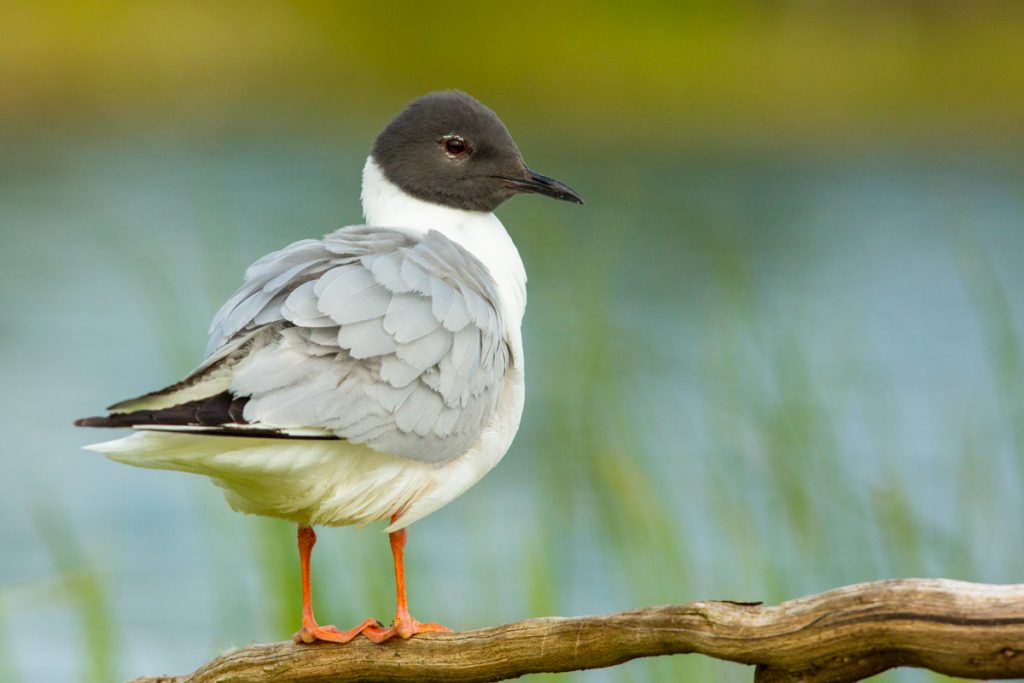 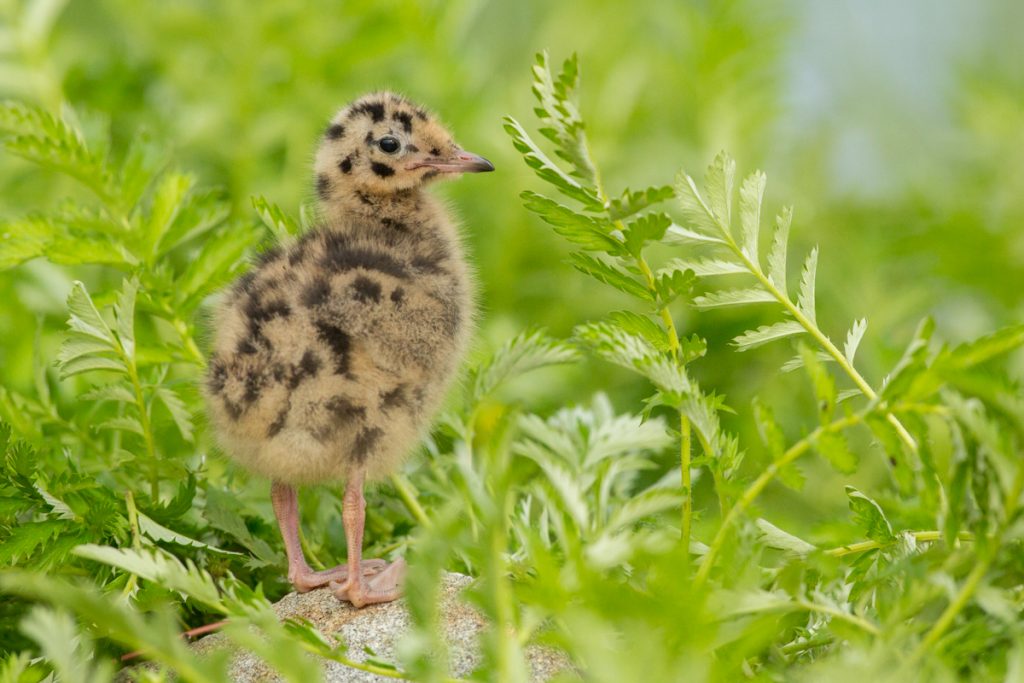 The journey back to our base was swift, thanks to our Captain James Bond, or was it Connor Stefanison ? Jess greeted us at the dock and after a swim in the lake we caught up on editing images from the morning, whilst others decided to take a quick nap before we went back to visit the family of Great Grey Owls.

Arriving back at the owls I had a quick go at trying to photograph the ground squirrels living in the field opposite. A family common site but again a new species for me so it was great waiting for them to pop out of their burrows. Soon they got used to me crawling around and after a while I think the group thought they had lost me in the tall grasses ! 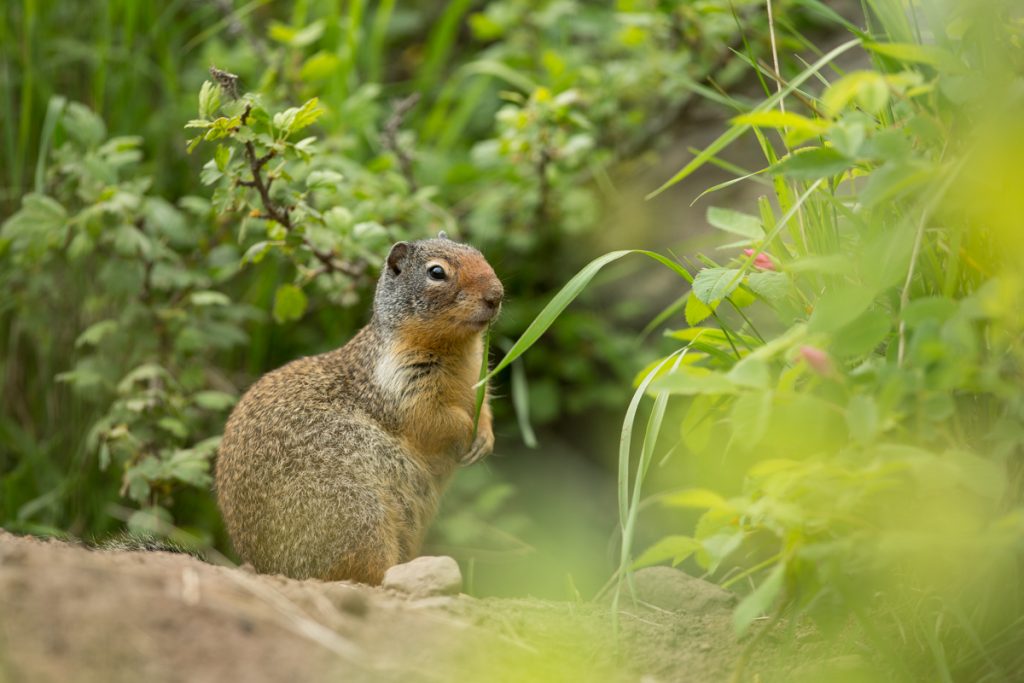 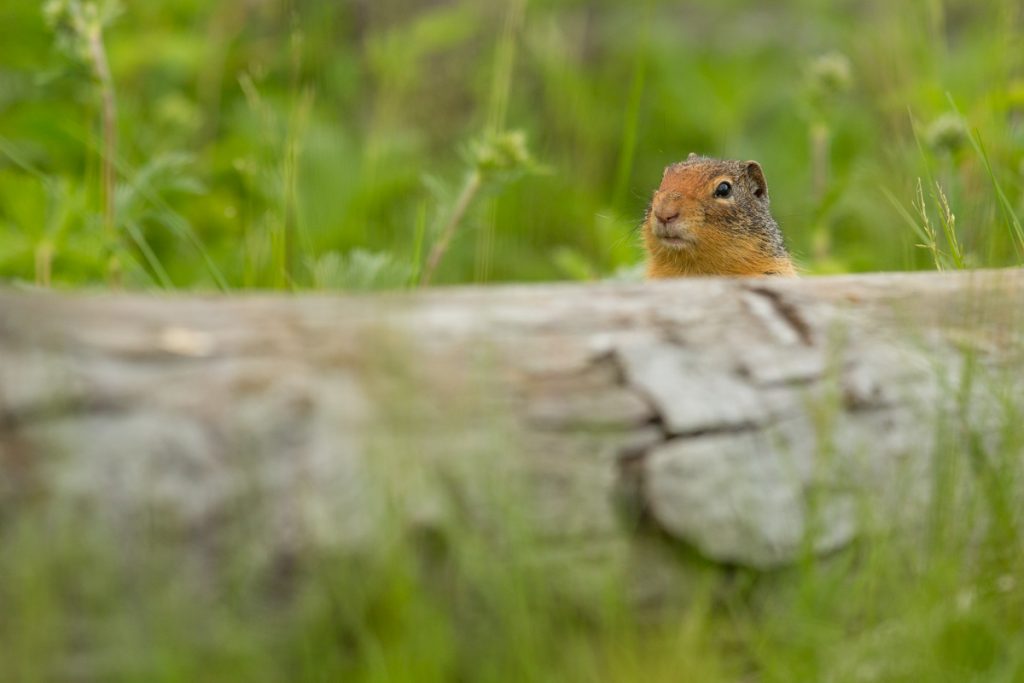 Returning to the dense woodland I soon caught up with the others who had located the owls. The female approved to be a lot more activate so I concentrated my efforts on trying to photograph the female in flight. Before I could get into position Gerry shouted “BEAR”, I have never moved so fast ! Luckily it was way off in the fields, but I was the other side. Running like a mad man I sprinted across the boggy field, boots steadily filling with water, towards the bears last known location. Then I saw a black speck making it’s way across the distant lake. Looking through the lens I followed and photographed what could have been anything. It was only when the bear had reached the edge of the lake that I saw it’s form. Shaking it’s black shaggy coat free of water it disappeared into the woods. I was starstruck…my first ever wild bear sighting. Although it was only for a brief few seconds it was, and still is, one of the best memories of wildlife I had ever encountered ! 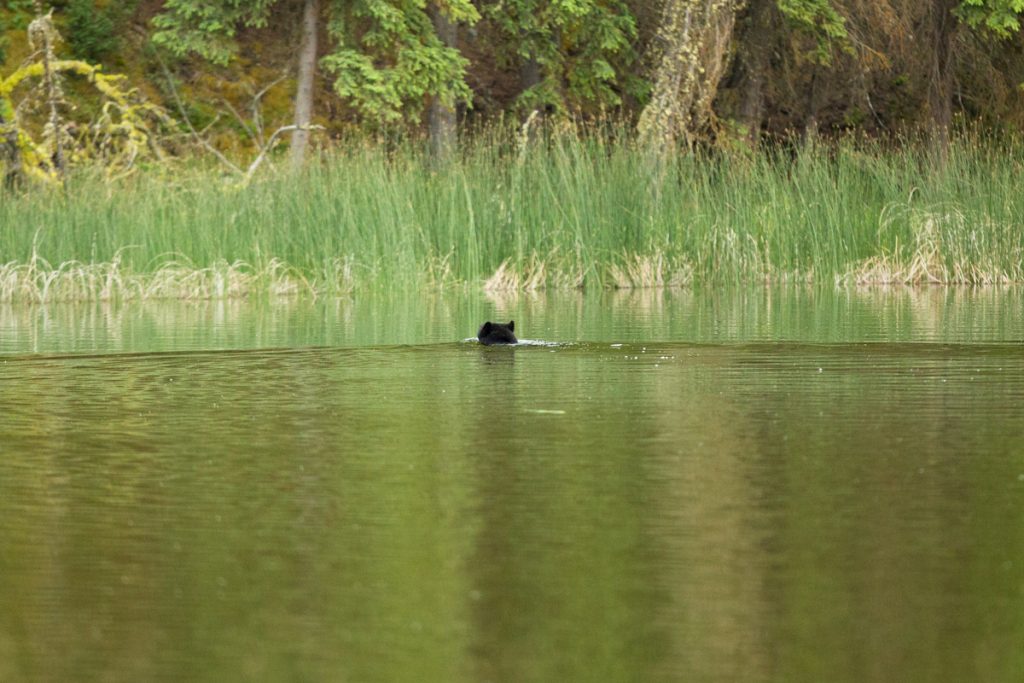 Walking back to the group I shared the good news and my smile reached ear to ear. After a brief rest having ran to see the bear I settled myself in for the long waiting game to capture the owl in flight.Having no tripod I rested my camera gear on my knees and waited. Now during this time I would periodically hand-hold the 5kg lens to be ready for takeoff. The female Great Grey was poised to take off so I waited and waited and waited. In short I waited forty minutes until she decided to fly away from me. Now you can’t have it all in wildlife photography, I actually ended up getting tendonitis from hand-holding so always remember your tripod ! In the end I did however manage to get some really great photos and to watch the female feed the chicks was a great privilege. 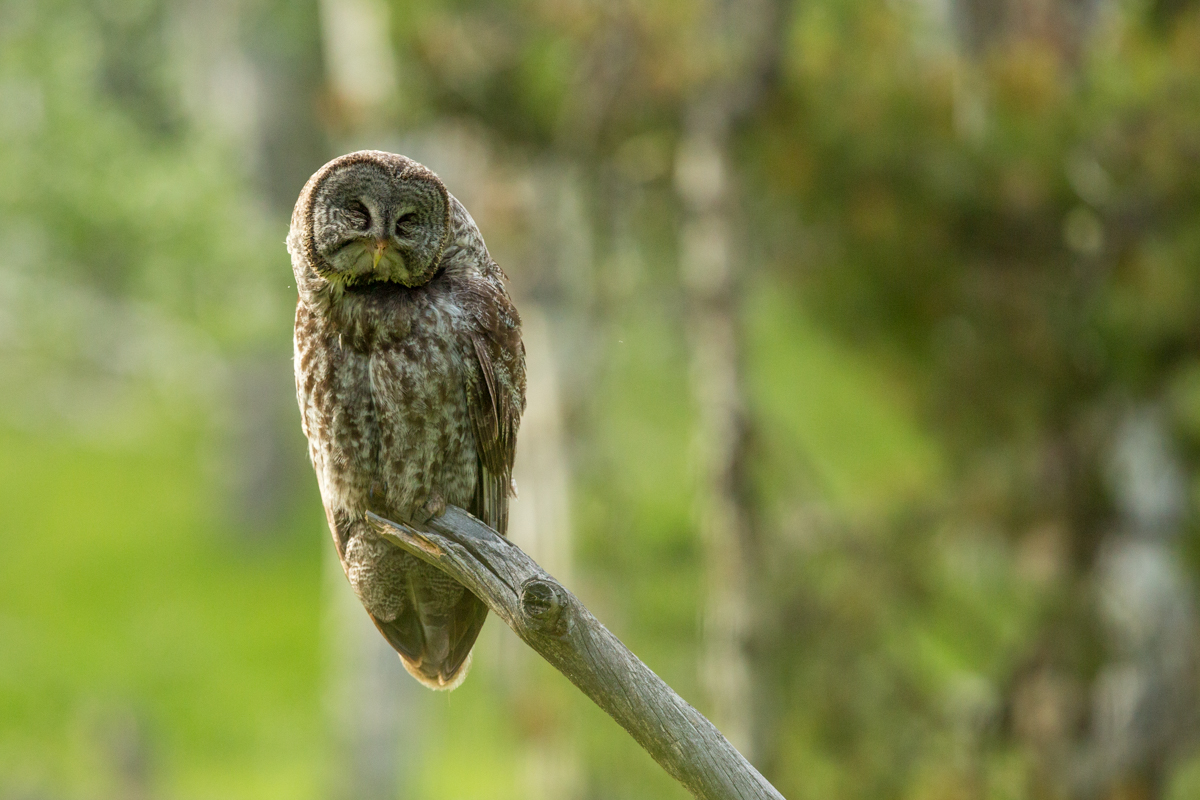 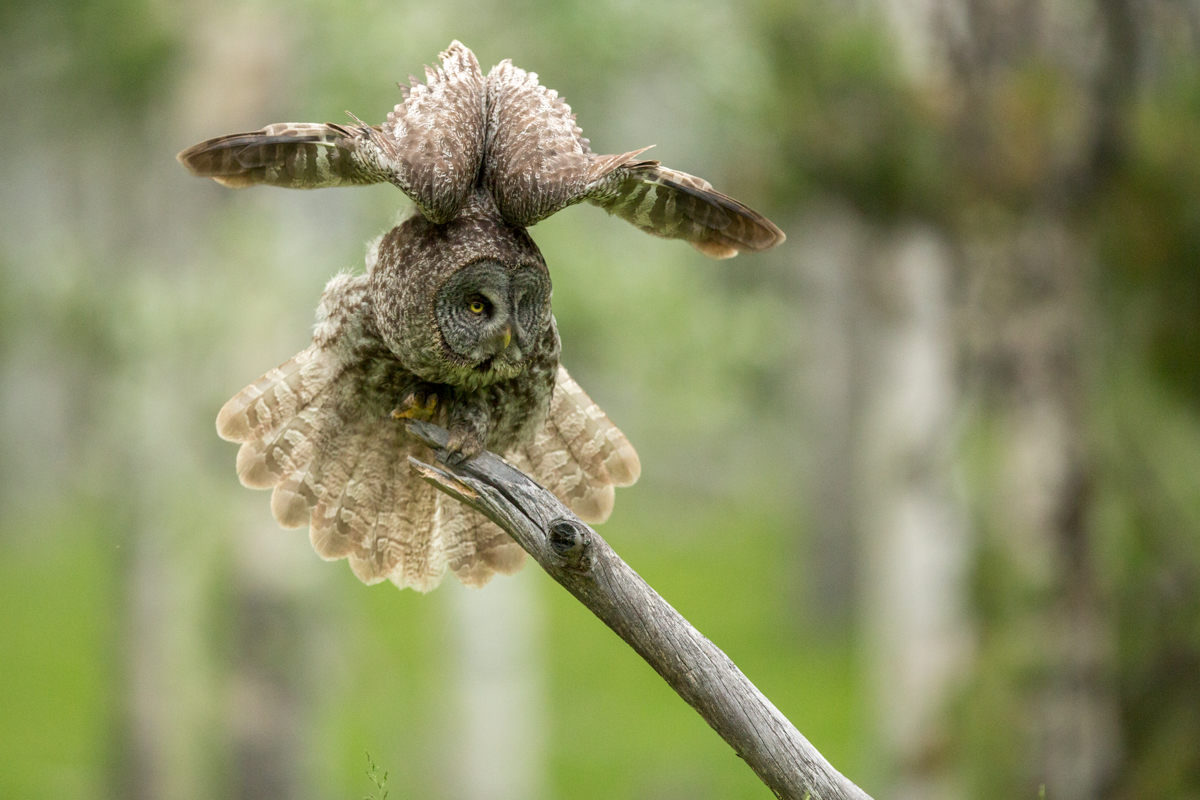 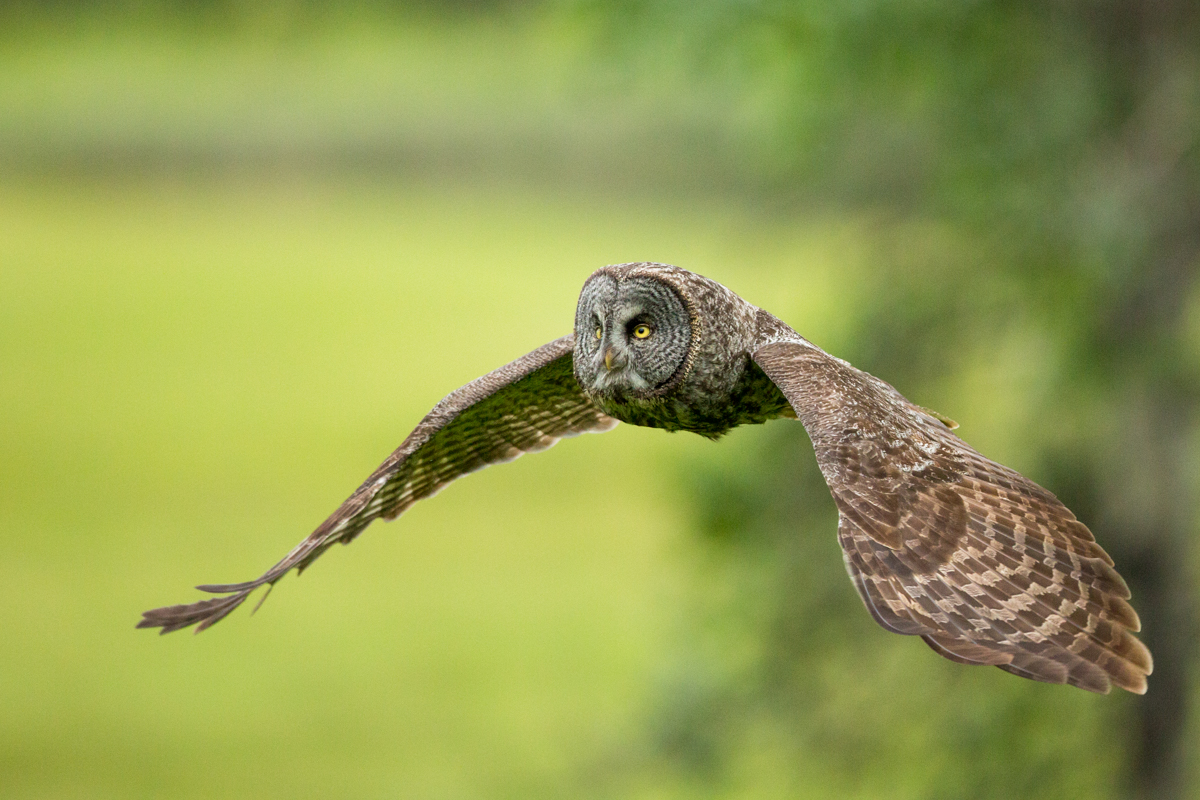 On one occasion the female brought in a red squirrel and one chick decided to go all in, this chick had high hopes at it stuffed the prey item into it’s throat. At times the poor chick would pause for a few minutes before all that was left hanging out was the tail of the squirrel. A great piece of behaviour to witness and I couldn’t wait to see what the rest of the trip would bring ! 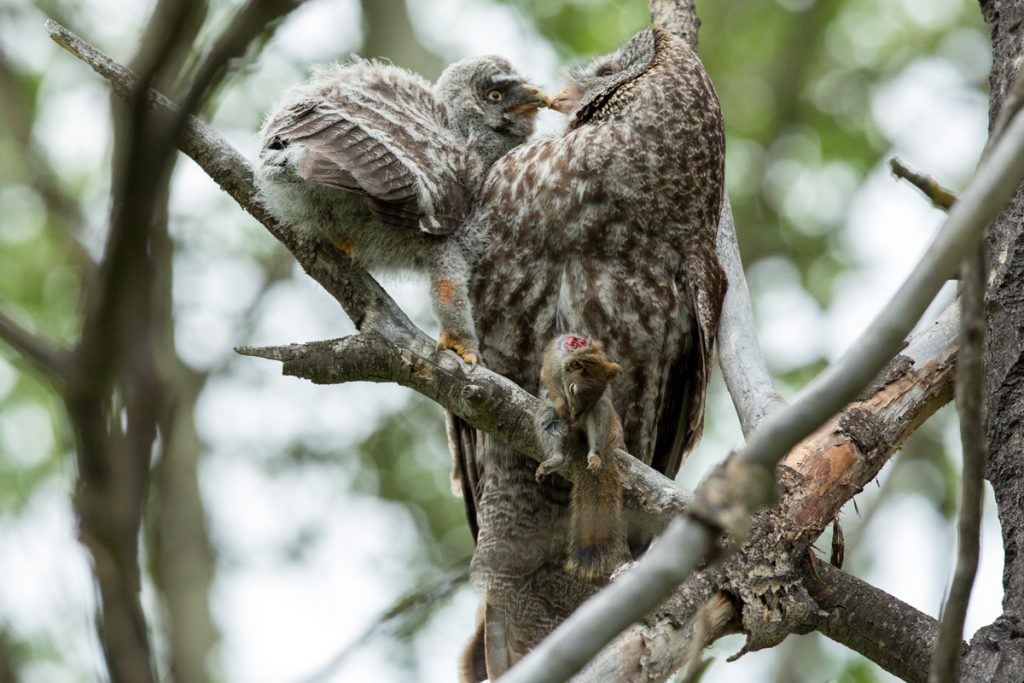 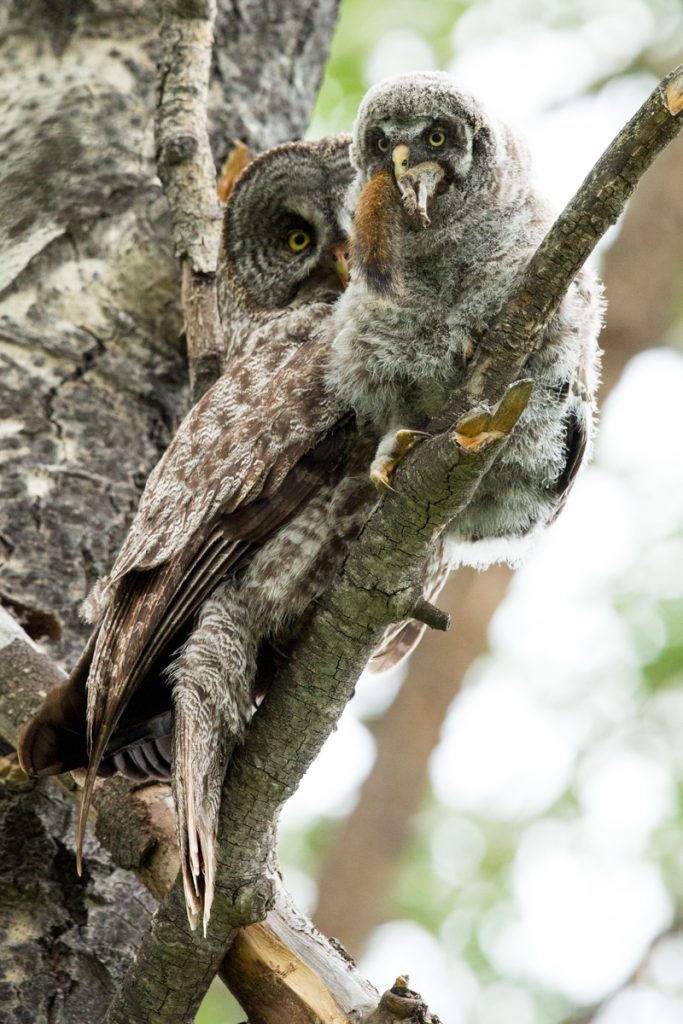