I am really enjoying photographing trees at the minute. Having a dad who ‘blows me out of the water’ when it comes to landscape photography can be a challenge ! But he was impressed with what i had shot previously and so I was raring to get out again to improve on what I had previously shot.

With a shout from family members “SNOW !” I rushed to the window to see a sight all UK photographers dream. A heavy dusting of snow with a continuing cascade of white powder sent motivational shivers down my spine. I knew that the snow shower wouldn’t last long and I headed straight out.

Visiting the same location as my previous post I was excited at the prospect of the shoot. With a few early risers and the same runners lapping the paths, I slowly made my way around to see what would take my eye. Having found a few great locations from the previous visit I headed to a line of silver birch trees which took on a cold and powerful character with the heavy snow complementing their silvery trunks. This image for me was one of my favourite shots of the encounter and one I look forward to printing. After walking around and knowing that the snow shower could stop at any minute my attention turned to the small island in the middle of the lake. A single cormorant was perched way up in the top of the snow capped trees. At this point I really wished I had my long lens with me but in a way being restricted made me think more creatively. Having shot the same island before I knew of a good vantage point and with the snow fall at it’s heaviest I took a few shots hoping that I got the trees and cormorant in focus. I should mention that the snowfall was so heavy that the lens was struggling with the autofocus. So when I did get home to see the shot I was thankful that the image came out just as I had hoped. Making my way to the end of my route I saw that the snow was already starting to melt and the small neighbouring lake was surrounded by small saplings. The saplings were a beautiful brassy red and the melting snow gave them a shined effect. Coupled with the stillness of the water below I opted for a panorama to give a true sense of calm and stillness.

Below are a section of some of the others images I took that day. I will be looking forward to writing the next blog post, maybe a change of topic or should that be scenery. 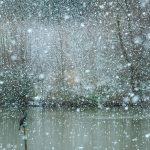 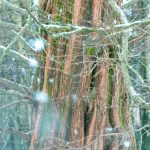 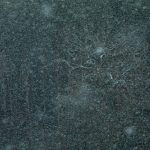