Having had fun playing around with the soft box around the garden I headed out to try it out and see how it performed whilst out in the field. I didn’t have any particular subject in mind and to be honest it was just refreshing to get out of the house and go for a walk. My friend Jonathan Barnes had joined and before anyone tell’s me off, yes it was socially distanced. Jonathan has a great interest in trains and mainly focuses on photographing various different trains and today was a bit different for him.

We first went to check on an owl box I had put up and it looked as though squirrels had started building a nest, not surprising as we are quite close to town. Yomping 18ft up a tree which was soaked through from last night’s rain was no easy feat but was fun to see if my hard work had paid off. I’m not too worried as I have a site where I will be putting up a few more nest boxes in the hopes of Little and Tawny Owls nesting so stay tuned.

As we walked around the site we came across large growths of Old man’s beard. No this wasn’t a an actual old mans beard, the name refers to the wispy seed pods which resemble that of a white beard. The French name for old man’s beard is ‘herbe aux gueux’ – the beggar’s or rascal’s herb.   This is a reference to its use by beggars; they used its acrid sap to irritate the skin to give it a sore and ulcerated look  – in order to induce sympathy in, and perhaps a donation from, passers by ! My using my Sigma 105mm macro coupled with the soft box I hoped to clear the background of the image to focus on the delicate soft look of the seed pods. This worked to great effect and with the flash set at around 1/4th of it’s power I could achieve the image I wanted. Like previously using flash meant that I could get away with not using a tripod as I would have enough light to keep my shutter speed high. 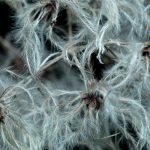 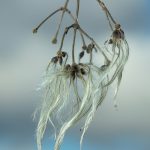 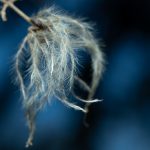 The soft touch of the seed pods and featherlike appearance tendered to a black and white post processing. This image is one that I particularly liked as for me the soft textures are illuminated by the conversion to black and white. After a great deal of time spent photographing the Old man’s beard, yes even as I write this it does sound strange, we found some lichen encrusted trees. Lichen is a great way to tell how healthy the air is, there was an array of different shapes and colours. I described it akin to a coral reef on a stick. The way the structure, almost alien like, had grown to create small cups really was incredible. The soft box was great at creating a dark background in order to really show off the vibrant brilliance of the lichen and fungus. 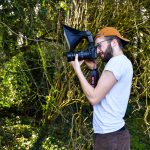 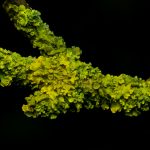 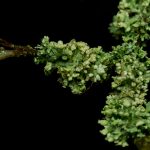 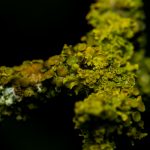 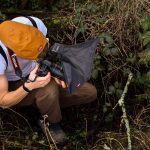 With it having rained the night before and with a cold winter’s breeze water droplets had settled on the grasses beneath our feet. A subject which ordinarily you might just walk past but I thought it would be a great subject to photograph. The soft box really helped to illuminate the tiny droplets of water that had settled in the creases of the grass blades. In this situation the soft box helped to bring out the jewel-like qualities of the water droplets. 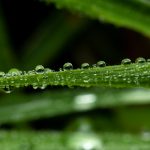 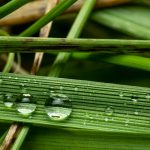 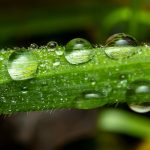 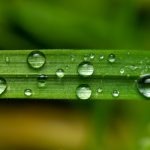 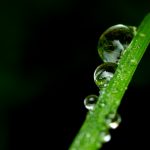 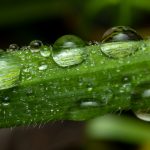 After a very productive field test we ended on finding the remnants of a Gall wasp. These tiny little wasps, around 1mm in size, lay their eggs in a plants seed pod. This process turns the seed hard and therefore protects the growing larvae in the seed pod. It was a great way to end and I am looking forward to summer time to really put my macro skills to the test. A  big thank you for Jonathan for taking the behind the scenes images for me, hopefully they have made the blog a little more interesting for those tuning it ! 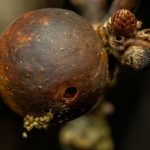 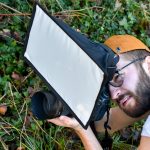